Play14: Practicing Serious Games with Talented People Is a Great Way to Learn

I've spent one day at #play14, an unconference about Serious Games taking place last week in Luxembourg. This is the kind of conference that reveals an entire new world, that fills you with ideas and enthusiasm, and gives you memories that will never erase. Let me tell you about my experience.

Disclaimer: Marmelab is a sponsor of this year's event. Yann, our Scrummaster, is one of the 3 organizers of the conference. But as for me, honestly, I didn't know what to expect before last week.

Play14 is a 2 days event about Serious Games, but with no program. The schedule builds itself collaboratively, during a 30 minutes exercise called the Marketplace. The participants are mostly Agile Coaches, but the variety of nationalities and professions of the people I met is unprecedented for me. It is organized by a team of 3 volunteers since 2014, so this year's event was the fourth in Luxembourg - but the event already took place in many other European cities. 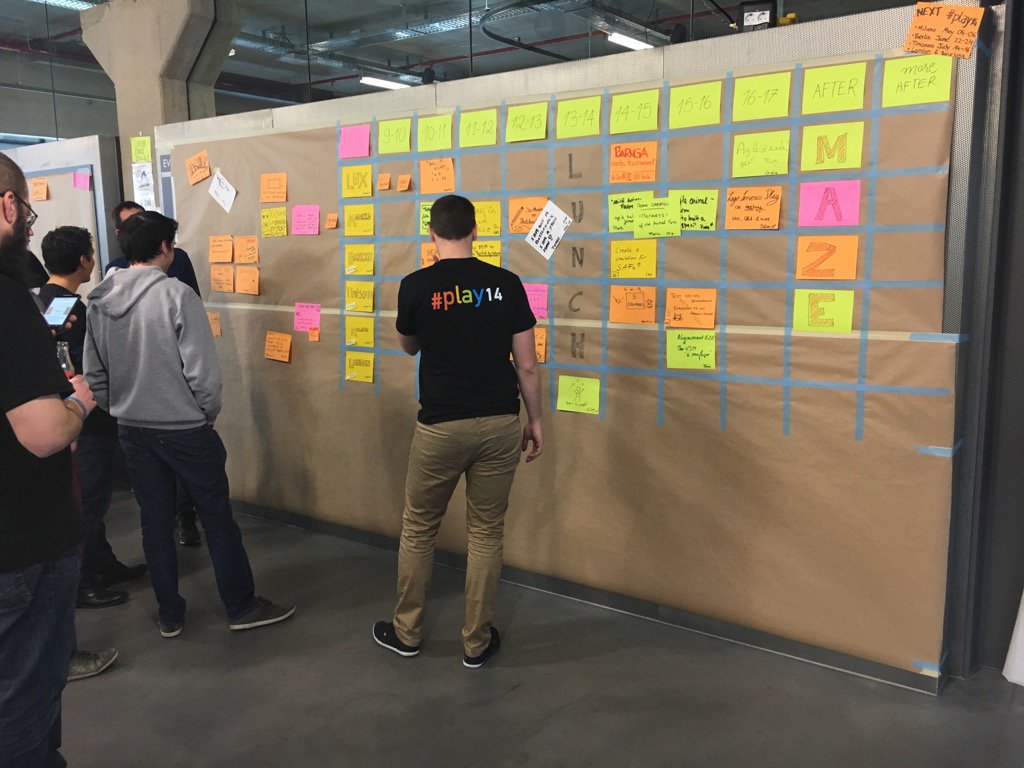 We play together during one hour sessions, facilitated by a volunteer, then debrief about what we learned, and how we could use it in our day jobs. This event counted about 60 participants, which is a lot. During most workshops, we were divided into 2 to 4 groups of between 15 and 40 people.

Simply put, it's a way to learn Serious games by practicing them with other people, or to build new serious games collaboratively.

If you think that "Serious games" sounds like a loss of time for serious work, then I advise reading the next paragraph. If you agree that a game can change the way people work, behave, and interact in a good way, skip to the next section.

Using games for educational purpose seems natural these days. It's not just about Montessori: a teacher near you is probably playing with their students right now to teach them Maths, Grammar, or Soccer. Also, it seems that everyone agree that, in an ever-changing world, adults need to keep on learning all their lives. But then, why should we keep the learning, but loose the gaming, while growing up? 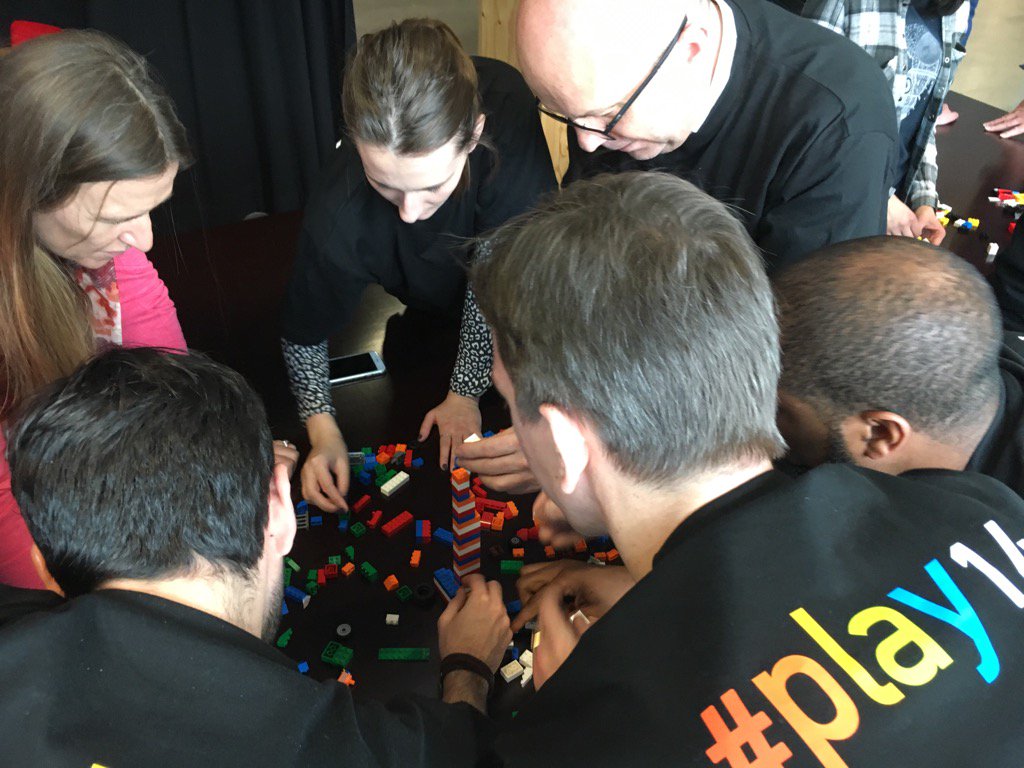 The #play14 participants share the opinion that having fun at work is a great thing. It boosts our motivation, it makes us more efficient, it spreads the knowledge across teams more quickly, and it reduces the HR costs linked to recruitment and training. But more specifically, they believe in the power of non-software games. At #play14, I didn't see a single workshop where people stared at a screen. Instead, they look at each other, and participate with their hands, their mouth, and their body.

So what kind of Serious Games is this about? The kind you've already read in this blog, for instance the Team Responsibility game, or the Animal Farm (both articles are in French). But to help you better understand what #play14 feels like, let's focus on two games I played on Friday.

What can Kapla teach us about the necessary collaboration between Dev and Ops teams? Actually, quite a lot. During 40 minutes, one team (the Devs) tries to build a tower with Kapla, following a simple backlog of requirements (such as "the tower must be at least 10cm high"). The other team (the Ops) is responsible for moving the tower to "production" (another table), but also for keeping this "production" up and running.

That leads very quickly to conflicts and inefficiencies. For instance:

For companies where the separation of devs and ops teams creates chaos and delays, this game is revealing. It's a very efficient way to give people the will to change, and to collaborate more.

The game itself wasn't completely ready for corporate play. Some glitches in the rules, in the timing, or in the facilitation, became obvious while we played. But that's also what's great about #play14: you can test and refine games before using them in your company, and receive feedback from very open-minded and constructive players.

I really enjoyed playing this game, and I'll probably use it in the future when I meet the symptoms of a "Devs vs Ops" organization. 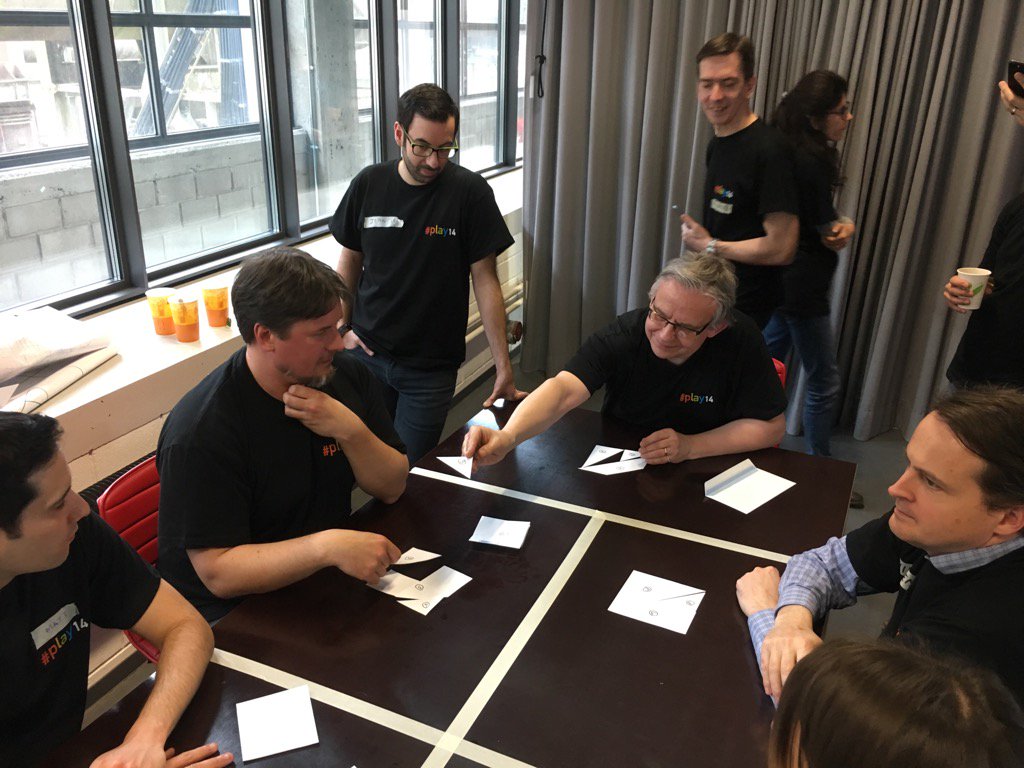 After a few minutes, it seems that the rules are unfair: some participants have shapes that are easy to arrange into a square, and some have pieces that cannot be assembled into a square at all. The constraint about not taking a piece from another player leads to a dead end.

Spoiler alert: if you ever want to play this game, don't read what follows.

After a few minutes of head scratching, a participant finds the solution: if it's not possible to take a piece, nothing forbids a participant to give some or all their pieces to another player.

Then, two behaviors emerge: people who get rid of the pieces they don't need, and people who give some of their pieces because another player needs it, even if that breaks the first player's square. These two behaviors, that we can call selfish and selfless, are individually not enough to win the game. Because pieces can be arranged into squares in various ways, but only one combination allows all five players to assemble a square. That means one player with a perfect square will need to break their square during the game. After between five and sixty minutes, the players manage to assemble five squares.

This is a great illustration of collaboration practices in a corporate context. Selfish and selfless people are both required. People who know how to play by the rules, but also push the limits (and finding the taking/giving trick) are also necessary. And collaborating without words is exhausting: meetings are effective!

Once again, I loved playing this game, and debriefing about what we learned with the other participants.

I also played many other games and activities, most of which you can read about somewhere on the net. There are also tons of books about serious games, so why is going to #play14 such a thrilling experience?

It's the People, Stupid

Since I've come back, the single distinctive aspect about the #play14 conference that I talk about, is the people. All participants come with a genuine will to learn, share, and collaborate. Every discussion is super constructive, experimented gamers take great care of newcomers, and when I didn't play, there were so many talented people to speak with that I simply never stopped.

What the organizers managed to build is more than a conference: it's an osmosis. #Play14 is like a fluid where good will and good ideas circulate freely, and this makes for an awesome experience.

One simple example is the Icebreakers session that took place the Thursday evening (by the way, one useful piece of advice: don't arrive in the morning of the first conference day ; instead, arrive the day before, and join the evening session where people get to know each other through games). During about one hour, we played super simple games with all 60 participants, most of whom I had never met. After this session, talking to everyone in the conference became super natural, and I must admit that leaving the conference was close to heartbreaking.

Attending #play14 was a great training for my soft skills. While it's mostly valuable for coaches, project managers, or more generally, managers and executives, everyone can learn something there, and use it some time in the future to transform a boring meeting into something everyone has fun with.

I'll definitely attend one of the next editions. This year, there will be a #play14 in Milano, Berlin, Timisoara, London, and Barcelona. If there is a #play14 near you, rush there. You won't be disappointed.